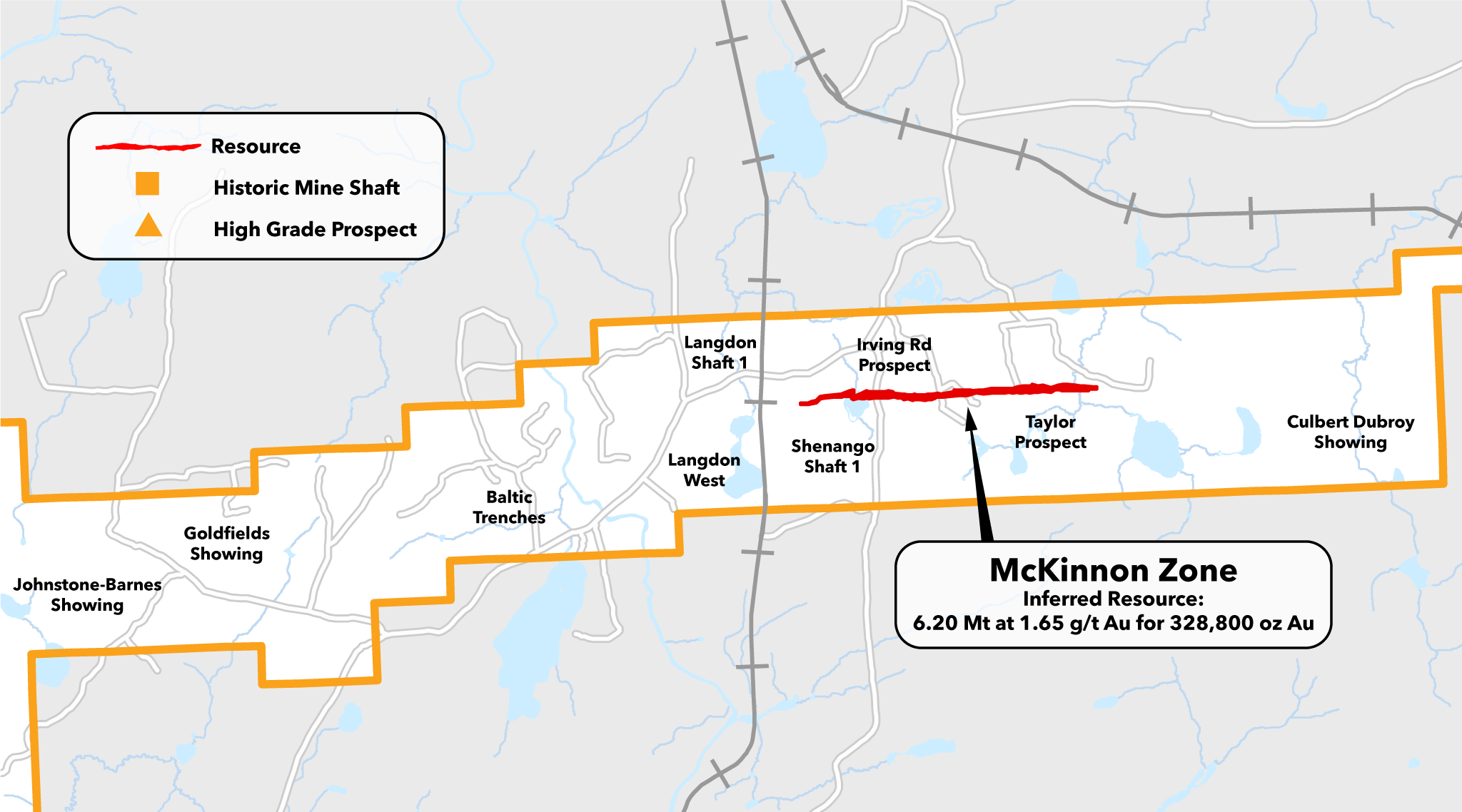 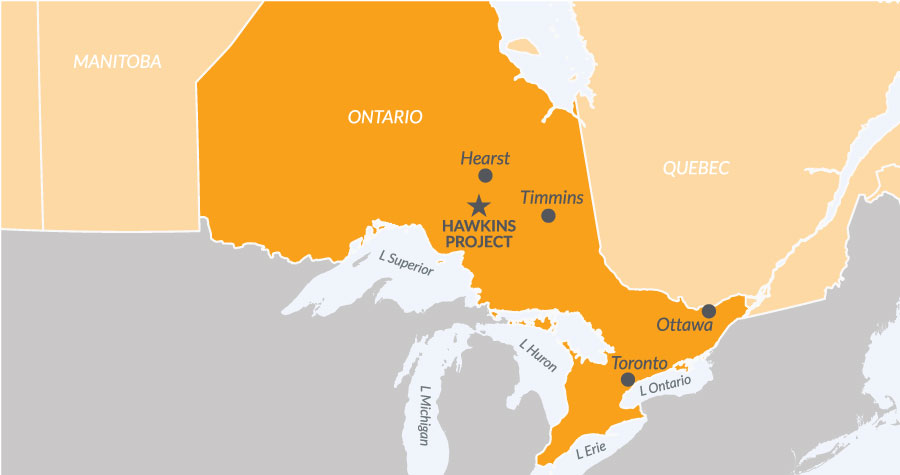 The Hawkins Property has been sporadically explored for gold beginning with the discovery of the Taylor Prospect in 1923. The Property hosts the former Shenango Gold Mine that produced intermittently between 1937 and 1945. Exploration by Falconbridge Limited from 1983 to 1986 was the most comprehensive exploration program on the Property with drilling and trenching defining an auriferous shear zone with values of 0.5 to 4.0 g/t Au (grams per tonne gold) over 4 to 30 m widths along a 3.7 km trend.

The Hawkins Gold Property is underlain by predominately Archean rocks of the Kabinakagami Lake greenstone belt that is part of the Wawa Subprovince of the Superior Province in the Canadian Shield. This east-west trending belt is 1 to 6 km wide and composed of predominantly metavolcanic and metasedimentary rocks. The Property straddles the 1 km wide Puskuta Deformation Zone that is a steeply-dipping, dextral, transcurrent deformation zone that on a regional scale bounds the south side of the Kabinakagami Lake greenstone belt and controls the location of gold mineralization.

Subsequent to the discovery of the Goldfield’s surface showing, Aurlot Exploration Ltd. (Aurlot) under an agreement with Goldfield’s completed geological mapping, sampling, soil geochemistry, IP geophysics, and diamond drilling (13 holes for 1,780 ft). Aurlot’s “HK” series holes tested exploration targets west of the Oba River. The best drill result was HK89-01 that intersected 3.8 g/t Au over 1.2 m (Lahti,1989).
Aurlot completed an IP survey over the western part of the McKinnon Property (west of the Oba River) and identified a several, significant chargeability anomalies. Particularly noteworthy is a relatively continuous horizon of elevated chargeability in interlayered mafic and felsic rocks surrounding the tonalite intrusion. This is a potential drill target that is on strike from the McKinnon Deposit.

Discovered in 1989 and about 5.5 km to the west of the McKinnon Gold Deposit, the Goldfields showing appears to represent a different geologic setting from McKinnon. The gold values are found in silicified and sericitized felsic rocks, which have undergone intensive deformation, shearing and small-scale faulting. The gold mineralization is associated with up to 20% pyrrhotite, pyrite, and minor chalcopyrite.

The Property hosts the former Shenango Gold Mine that produced intermittently between 1937 and 1945 (66.2 oz). Production from an open cut and from Shenango 1 and 2 shafts 15.6 m and 40.5 m respectively.

This showing also consists of quartz veins near the contact between mafic metavolcanic and felsic rocks, with gold with pyrite, chalcopyrite, galena, and occasionally a little pyrrhotite. The richer gold-bearing vein sections appear to depend upon the presence of galena, for it is there that the coarse gold appears to be more heavily concentrated.

The Deposit is a 3.7-km long zone with mineralization that has been defined from surface to an average depth of 125 m.

Exploration by Falconbridge Limited, from 1983 to 1986 was the most comprehensive exploration program on the Property with 36 trenches in addition to drilling. Most of Falconbridge’s holes targeted the Zone at less than 200 m depth. Two almost 700 m holes confirmed the Zone continued at depth.

In Winter 2021, E2Gold drilled 17 holes for a total of 2,881m in a confirmational drilling program, designed to affirm the location of the McKinnon Zone. The current phase 2 drilling is focused on stepping out of the known Resource, both along strike and at depth.

This mineralization is within the Puskuta Deformation Zone and is associated with pervasive sericite and carbonate alteration.
Higher-grade gold mineralization occurs within the McKinnon Gold Deposit over strike lengths of 70 to 250 m and widths of 1 to 10 m at the Taylor occurrence and past-producing Shenango Mine. The zones contain a number of small quartz veins from 10 to 50 cm (centimetres) wide, along with disseminations of pyrite and chalcopyrite, and in some cases pyrite stringers and blebs. At the Taylor occurrence pyrrhotite, sphalerite, and galena are also present in minor quantities.